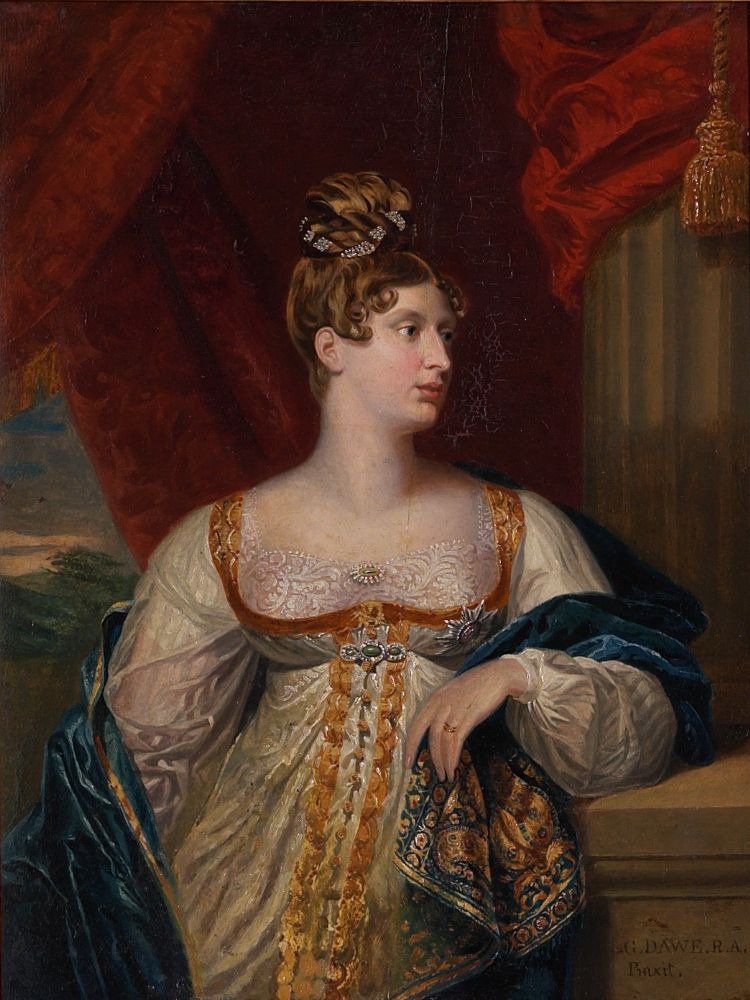 Daughter of George IV and Caroline of Brunswick

Princess Charlotte has been forgotten in British royal history owing to her untimely death at only 21. If she had lived, Charlotte would have been Queen and the current royal family would be very different.

Charlotte was born at the beginning of 1796, while her grandfather George III was King. Despite having 15 children, King George had no legitimate grandchildren and therefore the succession was in question. His eldest son, George, Prince of Wales, reluctantly married his cousin Princess Caroline of Brunswick in April 1795 to help pay off his debts. The only positive of this union was their daughter Charlotte. Shortly after her birth they separated. Princess Charlotte grew up at Carlton House, next to St James Palace and backing onto Pall Mall. Her mother moved to Blackheath in 1797, leaving baby Charlotte behind. She refused to return to the house owing to the Prince of Wales difficult behaviour. There would be no possibility of a future male heir.

The young Princess became the hope of Britain. The Georgian Kings had been unpopular owing to their extravagant and out of touch lifestyles. The 18th Century had allowed, for the first time in royal history, an opportunity for public opinion on the Monarch to be aired so publicly without fear of treason. George III’s eight adult sons were poorly regarded by the public. By 1790, none of them had any legitimate children, but plenty of illegitimate children. They were considered a drain on public money and leading immoral lives. Princess Charlotte’s birth in 1796 brought renewed optimism to Britain. She became the ‘People’s Princess’, which greatly annoyed her arrogant father as congregations were much more excited to see her than him.

Like many high-born children of the time, Charlotte spent most of her time with her governess, although she had little interest with learning. The one thing she was considered accomplished in was the piano. Her father dictated her life, how much time she spent with her mother and her spending allowance. Charlotte’s only escape from this controlled life was by marrying. She had a number of suitors including the dashing Prince Fredrick of Prussia and William of Orange, however it was Prince Leopold of Saxe-Coburg-Saafeld who won the Princess’ affections. Leopold was a minor German prince who ultimately became King of the Belgians. The pair were wed in May 1816 and settled at their own home of Claremont House in Surrey.

By the Spring of 1817, the succession seemed secure as Charlotte was expecting their first child. There was great interest from the public surrounding the impending royal birth, with many bookies taking bets on the sex of the baby. Charlotte spent the months leading up to the birth indulging in her favourite foods and doing very little exercise. The royal physicians were concerned that the baby would be very large so insisted she diet. On the 5th November Charlotte delivered a large still born son. Sadly the physicians were unable to revive him. The labour had been long and drawn out, exhausting the Princess. Charlotte accepted the news of her sons death, believing it to be God’s will. As she seemed well, the physicians left. In the early hours of the following morning, Charlotte started fitting. By the time a physician arrived she had died.

Charlotte’s death shocked the nation. The country entered a period of mourning with shops, the docks and the Law Courts all closing for two weeks. The Prince Regent was so taken by grief that he was unable to attend the funeral. Charlotte was buried with her son in St George’s Chapel. The succession was once again left in uncertainty. The King had no legitimate grandchildren and his youngest son was already 40 years old. His unmarried sons instantly rushed to marry suitable royal women to produce heirs. King George’s fourth son Edward, Duke of Kent hastened to leave his mistress and marry Leopold’s sister Victoria. Their daughter Victoria would become the sought after heir for Britain.