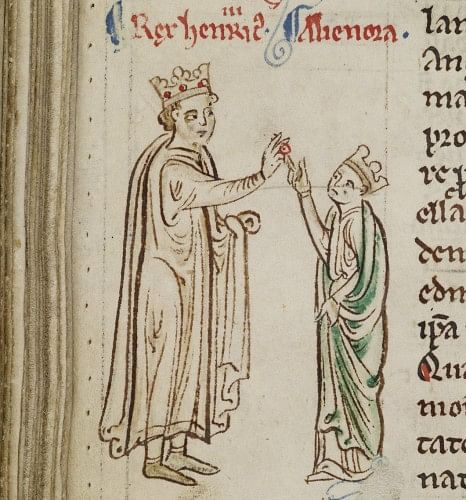 On the 14th January 1236, Henry III of England married Eleanor of Provence in Canterbury Cathedral. Henry had been King of England since he was nine years old when his father King John died in 1216. He had been needing a wife and marriage negotiations had been going on behind the scenes for years, but potential brides were turned down owing to political issues on the continent. In 1235 an agreement was made with Ramon Berenguer IV, Count of Provence to marry his daughter Eleanor. This alliance was purely political as it gave Henry more power in France as well as financial support in the form of Eleanor’s dowry. The couple met in Dover and ahead of the wedding for the first time. Henry was 28 and Eleanor only 12.

Eleanor’s wedding dress was made of gold fabric and her long dark hair was braided down her back. The Princess of Provence were known for the beauty and Henry was besotted with his new wife. This was shown by the extravagance of her Coronation which took place a few weeks after the wedding. Following this, many members of Eleanor’s extended family received senior positions within the royal court and government. This led to Eleanor’s unpopularity from the people.

Despite this Eleanor proved to be a loyal and devoted Queen and wife. Rumours had plagued her for the first few years of their marriage, that she was barren as their first child was not born until 1239. The birth of Edward, named after Edward the Confessor was a huge delight for the King and led to celebrations. They had a a further 4 more children.