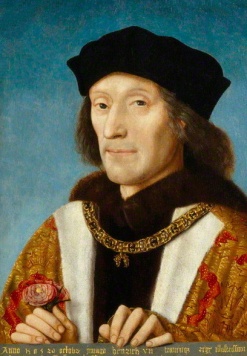 The Tudors. This name stimulates images of Henry VIII standing impressively in regal robes. You probably know which painting I am describing. If not, simply google Henry VIII and it should come up. He is synonymous with this dynasty, known for his numerous wives and changing the structure of religion in England. However, I feel his father, who gave this renowned dynasty his name, is often overlooked as a serious and boring king. I plan to change this perception.

Henry Tudor’s route to become king was not straightforward like the majority of rulers. As you an see above, neither of his parents were a monarch, so how did he come to be king? The answer is the Wars of the Roses. This series of conflicts officially began in 1455 with the Battle of St Albans and ended with Henry Tudor’s triumph at the Battle of Bosworth in 1485. The issues surrounding the initial battle stemmed from the political problems of the time, to the weakness of Henry VI and the shared royal bloodline from John of Gaunt, a son of Edward III. The establishment of two royal houses followed, The House of York and The House of Lancaster.

After Henry VI death, the House of York remained in power until Henry VII,  whose claim was through his mother, Margaret Beaufort to the Lancastrian line. (also a decedent of John of Gaunt) Henry’s early life is not widely known, which is unusual for a king. Much this was owing to his unorthodox royal family and distant claim to throne, which resulted in him spending his early years in exile abroad. Henry’s return came from the dislike of Yorkist King Richard III, who had overthrown his brother, Edward IV’s sons and heirs to take throne for himself. Margaret Beaufort was instrumental in promoting her son as an alternative king.  Richard’s defeat at Bosworth signaled the end of the Wars of the Roses, with Henry taking the throne and marrying Edward IV daughter, Elizabeth of York.

Now to address Henry as boring king. He was not boring but cautious. Unlike previous kings, Henry had not been brought up to be the next monarch and had therefore not been taught the ways of diplomacy and statesmanship, he had to learn this quickly. But he was ultimately a very successful king. He made England peaceful, for the first time in over 30 years, and vastly improved the country’s finances. But the success of Bosworth was not the end of Henry’s need to defend his position as king. Throughout his reign he had to contend with those that opposed his reign. Most notably Lambert Simnel and Perkin Warbeck, whom both posed separately as the ‘Princes in the Tower’, trying to play on the sympathies of the country. Luckily for Henry, his own supporters were larger in number and these threats were not long lasting. Yet the first Tudor King was never fully confident of this.

His main success of security was marrying Elizabeth of York, and in doing so uniting the two houses. Thus the Tudor Rose was born. Their marriage was prosperous and unusually caring for an arranged marriage. Together they had four children who reached adulthood, with the renowned Henry VIII taking the throne. Henry Tudor’s greatest accomplished can be argued as fully establishing the Tudor dynasty for his son, as Henry VIII never encountered any opposition to his rule.