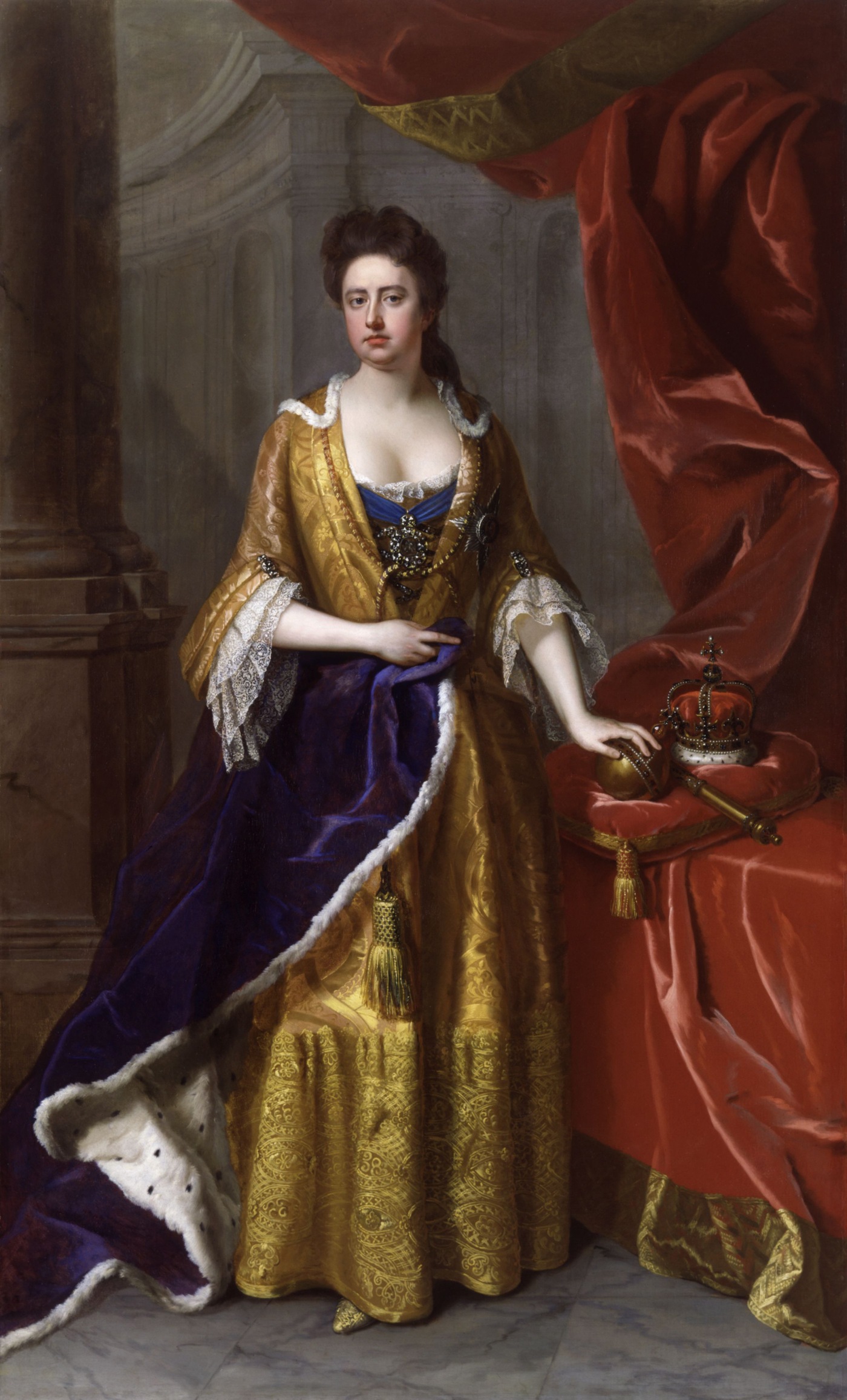 If you know anything about Queen Anne, you will probably know that when she died she was so large her coffin was almost square. Or you may know that she was involved in a scandalous relationship with a woman? How about the fact that she was officially the first monarch of Great Britain? To be honest, I only knew about the coffin fact until I began researching her.

One of the most interesting things about Anne was how she was never actually meant to be Queen. When she was born in 1665, her Uncle Charles II was only 5 years into his reign and still recently married. He did not have any children yet, but it was still assumed that he would. Despite this, it was still not thought that Anne would be Queen owing to her having an elder sister. However, as you may recall from my post on Charles II he did not produce a legitimate heir. The crown therefore came to Anne’s father, James II  who was an unpopular king. His reign was unsuccessful and he was forced to abdicate in favour of Anne’s elder sister Mary and her husband William of Orange who became joint rulers. However, they were unable to produce an heir, and after William’s death in 1702, Anne became Queen. In addition to this Anne and Mary’s mother, Anne Hyde was not royal, not normally allowed for monarch. She had worked as a chief maid to the Princess Royal, which is how she met James II. When Anne was born, other royal families looked down on her due to her mother’s lower birth rank, It was never expected that she would be Queen.

The fates were not looking great for Anne when she succeeded the throne, as she herself  had no heir either. Accounts do vary on the exact number, but Anne was said to have had at least 16 pregnancies, with only a few resulting in a living child. Her longest living son, Prince William, Duke of Gloucester, died at the age of 11 from smallpox. This was only 2 years before Anne came to the throne, already in her mid 30s, and therefore unlikely to conceive again. The succession had been a major concern throughout the Stuart’s reign’s, owing to the problems with religion. Anne was the last protestant monarch in the Stuart family.

Despite this sadness of losing so many children, Anne’s reign was fairly positive, owing to her immediate popularity after the dislike of her dutch brother-in-law. A favourable act that was passed during her reign was the 1707 Act of Union. This brought together England, Scotland and Ireland as Great Britain (Wales formed part of the Kingdom of England) under one parliament and therefore Anne was the first monarch of Great Britain. She lost popularity due to her close friendship with the Duke and Duchess of Marlborough. The Duke, John Churchill was a highly accomplished military commander and was victorious at the Battle of Blenheim in 1704. This success led Anne to bequest him and his wife Sarah the royal residence at Woodstock. This is where he had Blenheim Palace commissioned, though with public money, much to the annoyance of the people.

Anne’s friendship with his wife continued to a point of being a major political concern. Their friendship had been forged long before Anne became Queen, however, Anne became more and more dependent on Sarah. Their letter’s to each other were very informal, showing how Anne treated her as though they were equal status. ‘Mrs Freeman’ and ‘Mrs Morley’ were how they referred to each other. To top this off, Anne made Sarah Mistress of the Robes, the most senior position in the Royal Court for a woman to hold. This power and influence was significant. Rumours of them having a secret romance were questioned. Yet it did come to an end owing to political disagreements.

Despite what was speculated about Anne’s private life, she was devoted  to her husband, Prince George of Denmark who died in 1708 of chronic lung disease. His and Anne’s marriage had been a strong and close one, despite their children’s deaths. Anne was deeply sadden by his death, which may explain why she became to rely on others so heavily. Her death came in 1714. She had suffered with gout for many years and had not been able to walk for last few months. It must have been a horrible and painful death. As the last protestant Stuart, parliament used their power to find a new heir, a distant cousin in Hanover, George I.