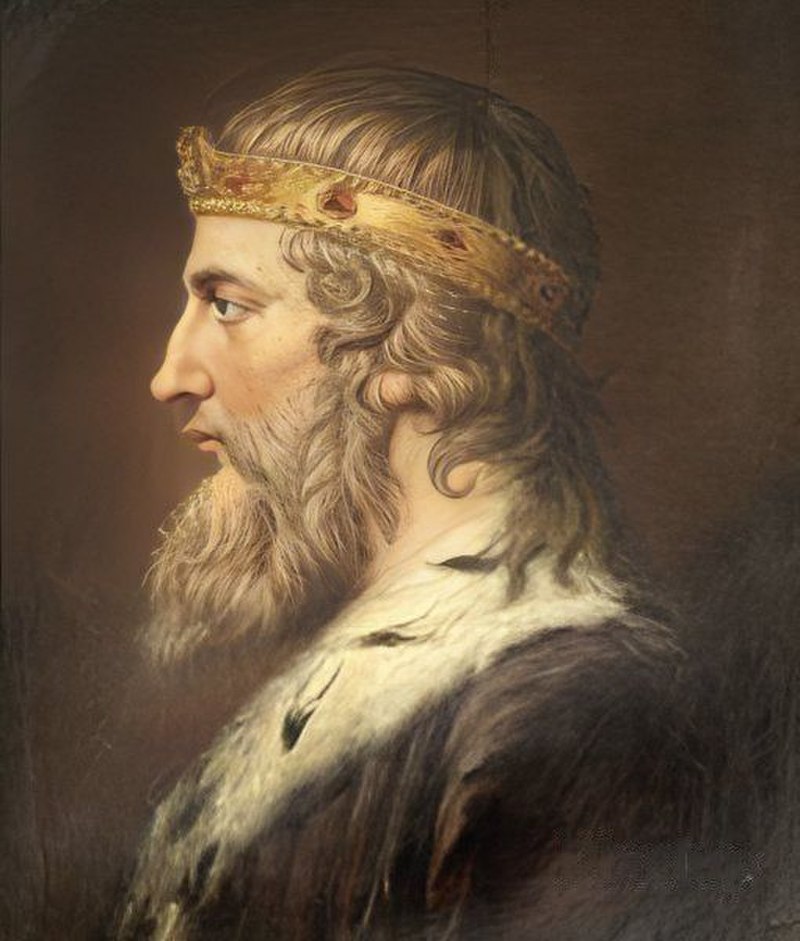 Son of Æthelwulf, King of Wessex and Osburh

To have gained a name like ‘Alfred the Great’, you have to have made a big impact during your life time, and Alfred certainly did. He was a natural leader and a brave warrior which were essential qualities in a Saxon King, but went a step further than previous kings with his peacemaking ability.

Like many future English kings, Alfred was not expected to one day be monarch. He had four elder brothers and so prospects for his life was not likely to be as noteworthy as it became. His early life is well documented by his biographer, Asser a Welsh monk who compiled his history in 893. According to Asser, Alfred visited Rome several times as a child, one of which was with his father on pilgrimage, during which Alfred was confirmed by Pope Leo IV. This travel gave him a broader continental perspective than any previous ruler.

During this time, England was divided into Kingdoms. What had originally been seven Kingdoms in the 5th Century, were then consolidated in the 8th century to become the four kingdoms of Anglo-Saxon England. They were Northumbria, Mercia, East-Anglia and Wessex. Each kingdom required a king to protect it from Danish invaders. All of Alfred’s brothers had been kings, the three closest in age to him had been successive kings of Wessex. Despite having sons to inherit, it was custom for the throne to pass to adult siblings to avoid minors being responsible at such a volatile time.

Alfred’s succession came with tragedy, after his brother, King Ethelred, died from his wounds acquired in one of the many battles against the Danes. The following years of Alfred’s reign were desperate, with the Danes pushing further and further across England. In early 878, after a surprise attack, Alfred was forced into hiding. Through caution and courage, Alfred had built up his army and fought the historic battle of Edington, in Wiltshire in May 878. The Danes were almost completely defeated, and Alfred’s greatness was demonstrated in how he dealt with remaining Danes. What would have been expected would be slaughter, common practice for enemies. However, Alfred celebrated them, baptized the leader and entertained all the remaining men for days before letting them go. This led to an enjoyable peace across the kingdoms for fourteen years.

The art of negotiation was an unusual skill for a Saxon king, and yet one Alfred had in abundance. He was able to make peace with future invades and agreed with the settled Danish invaders that they could keep East Anglia, as long as they kept away from Wessex and the south of England. In doing this Alfred was able to capture London, and secure his own kingdom. He was also smart enough to understand that peace does not always last, so spent time building up a array of large ships to defend the island. Alfred has been regarded as being the ‘father of the English navy’.

In addition to his prowess within battle and skill of diplomacy, Alfred championed the arts and learning, inviting many foreign scholars to court and pushed for education, teaching himself Latin.

At fifty. Alfred died in Winchester, the capital of his Kingdom Wessex, of ill health. He was initially buried in Old Minster, which is near the site of the current Winchester Cathedral, however this was lost after the Norman invasion of 1066. Monks exhumed Alfred’s body and moved it to Hyde Abbey, by the city walls, where he remained until the dissolution of the monasteries in 1536. Yet again Alfred’s resting place was disturbed in the 18th century, when the city of Winchester celebrated Alfred with a magnificent statue of him in the city centre. His bones were moved again, and after a brief time in London they returned to Winchester and have been placed next to St Bartholomew’s Church, although it is not certain that they are definitely his.

One thought on “Alfred the Great”