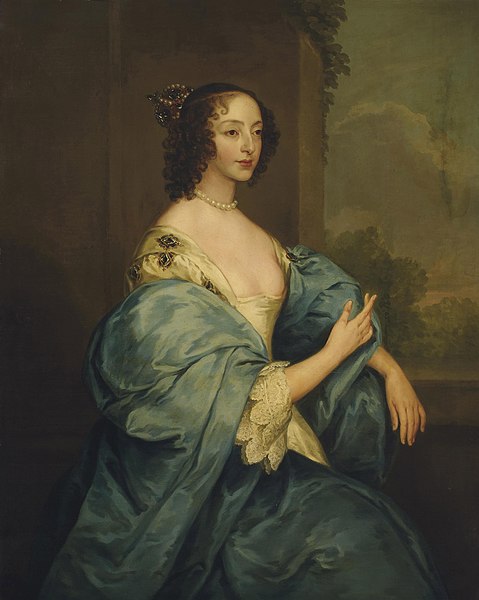 Daughter of Henry IV of France and Marie de’ Medici

Henrietta Maria was born the daughter of a King, became a wife to a King and a mother to two English Kings. As the daughter of the King of France it was expected that she may one day become a Queen consort, but no doubt she never expect to live in exile after her husbands death. Her life was defined by her Catholic faith which greatly shaped her attitude towards Monarchy and in so, significantly influenced her husbands actions. Ultimately she was not a good Queen for England. She did her duty in producing heirs but she refused to be Crowned Queen and in doing so, shunned the English people making her unpopular. Henrietta spent her final days in France and is buried with her ancestors near Paris.

Not even one-year-old, Henrietta’s father, King Henry IV of France was assassinated by a fanatic whom stabbed him in Paris. Henrietta’s mother, Marie de’ Medici, became regent for her brother Louis who was only eight years old. Therefore the young Princess was looked after solely by her governess. Henrietta was taught to ride and sing but little attention was given to academics.

The marriage negotiations between Henrietta and Charles I began in 1623, before Charles became King. He had been on route to Spain to negotiation with Philip IV for his daughter’s hand however no deal was made. A close advisor of Charles, who happened to be the godson of Henry IV suggest Henrietta Maria. An agreement was made and a wedding planned. Their wedding took place as in Paris at Notre Dame with Charles’s friend the Duke of Chevreuse stood in proxy as Charles. Once Henrietta was in England they had another wedding in Canterbury which was their first official meeting. At first, the pairing seemed to have been perfect, Henrietta was infatuated by Charles and he was charmed by the young French Princess. However, it didn’t take long for her fiery personality to show itself, particularly concerning the Coronation.

Henrietta was a staunch Catholic, and not only refused to be part of the Coronation ceremony and be crowned Queen of England, she even refused to be present in Westminster Abbey for Charles’ crowning. This shocked Charles and his courtiers, but nothing could be done as they were only too aware of the past conflicts of religion within the royal family. The couple’s relations did mellow over time, they went on to have eight children however, much of Charles’ downfall came from his reliance on Henrietta’s advice on ruling. She greatly disliked Parliament, and deeply believed in the Divine Right of Kings, and felt that no monarch should be answerable to anyone. This outlook was not only short-sighted, but was ultimately detrimental for Charles.

Charles’ actions led to the outbreak of Civil war. Henrietta’s court moved around the country to avoid the fighting. The last time she saw Charles in 1644. Less than 5 years later he was executed. Henrietta did not see this as she had fled to France. Charles’ death left her virtually destitute. She asked Cromwell for an allowance but his response was, that as she had refused to be crowned, she was not a proper Queen, and therefore had no claim on public money.

Henrietta died in 1669. She lived long enough to see Charles II restored, and is buried near Paris. Her legacy in England is still visible in her work as patron of the arts, with the Queen’s House in Greenwich an example of the work she encouraged.