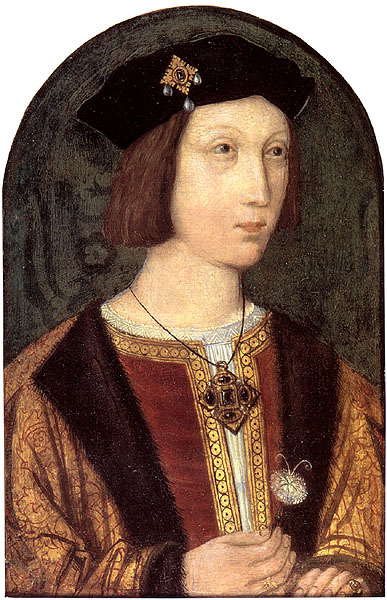 Son of Henry VII and Elizabeth of York

After the tumultuous Wars of the Roses had culminated with Henry Tudor victorious on Bosworth’s battlefield and his immediate marriage to Elizabeth of York aligned the two waring families. To establish a new Tudor dynasty they had children straightaway. Their first child Arthur was born prematurely 8-months after their wedding. He was named after King Arthur to emphasise any connection they had to Camelot and deliberately born in Winchester.

In 1489 he was created Prince of Wales and was provided his own household designed to raise him to one day be King. His education was taken seriously, and was led by John Rede, a former master at Winchester College. Arthur was taught poetry, grammar, languages and a particular focus on history. He was a diligent student. Like any boy of this time, he was a proficient rider and enjoyed jousting alongside his brother Henry. Right from his birth, Henry VII negotiated plans for Arthur to marry a foreign princess to forge political alliances to benefit England. The Treaty of Medina del Campo was signed in March 1489 which agreed to the union of England and Spain through the marriage of Arthur and Princess Katherine of Aragon.

Ferdinand of Aragon and his wife Isabella of Castile were joint rulers of Spain and had the advantage of coming from an established line of rules unlike Henry VII whose success on the battlefield was his only claim. The one threat to the Spanish rulers was the powerful French and they were after an ally. Henry was able to fill this requirement. The Treaty set out that the too heirs would marry once they had reached maturity and Katherine would move to England and bring with her a dowry of 200,000 crowns. The couple were wed in November 1501.

The new Prince and Princess of Wales naturally established their home in Wales at Ludlow Castle. Arthur’s health was in decline, and in March 1502 both he and Katherine became ill from a type of sweating illness, suspected to be consumption (tuberculosis). Katherine recovered after a few weeks, but sadly Arthur did not. He died 2nd April 1502. Upon hearing the news of his son’s death, King Henry broke down and was consoled in pray by his wife Elizabeth. Arthur’s funeral took place on 25th April at Worcester Cathedral where his body was buried.