Daughter of Francis, Duke of Teck and Princess Mary Adelaide of Cambridge

The grandmother to our current Queen and a personal favourite of Queen Victoria, Mary of Teck spanned two Queen’s reigns. This 80 year period saw monumental change in England and Mary was very present for it all. As the wife of George V she was a sign of resilience during the horrendous First World War and her dutiful dignity remained during the difficult abdication crisis after her husband’s death. However there was another side to Mary that the public was never really aware of, a cold and distant mother who was unable to show emotion, particularly to her youngest son who was disabled. Nevertheless Mary was an influential figure in her her Granddaughter Elizabeth’s life and her can be argued as a one of the main reasons we still have a monarchy today.

Despite being a Princess of Teck which was part of Wurttemberg in Germany, Mary, known to her family as May, was born in England into a minor royal family in Kensington Palace.  Her great-grandfather had been George III, though he had 15 children which meant Mary grew up in more modest circumstances. Her education was led at home by her mother and a governess. Unusual for a mother of that class, Princess Mary Adelaide was very involved with her daughters upbringing. She instilled the importance of helping others in her daughter, and would take her to visit the poor and those in need. The family was close, May being the eldest of four children and the only girl, but financially they were in difficulty. To alleviate some costs, the family moved to the continent and stayed with relations in Italy which util being able to return in 1885.

Queen Victoria had always been very fond of May and it was her idea for May to be a potential suitable bride for her grandson, Prince Eddy who would one day be King. The engagement was announced in December 1891, however only a month later, Eddy died of influenza. May’s future became very uncertain, and she feared she would end up a spinster. However, during the period of mourning for the loss of the future King, May grew close to his younger brother, George. He was the second son, and therefore next in line. Queen Victoria approved the match, and they were wed in 1893.

Their marriage was loving, unusual for royalty and unlike his philandering father, the future King Edward VII, George V never took a mistress. The marriage produced six children; five sons and one daughter. Their youngest son John was born with epilepsy and grew up separately to the family in a cottage on the Sandringham Estate with his own personal nanny. May was not considered very affectionate or maternal to her children. This was not uncommon for mothers in those days who manly relied on nannies to raise their children, however both her sons David and Bertie referred to their difficult childhood’s owing to their parents lack of affection. 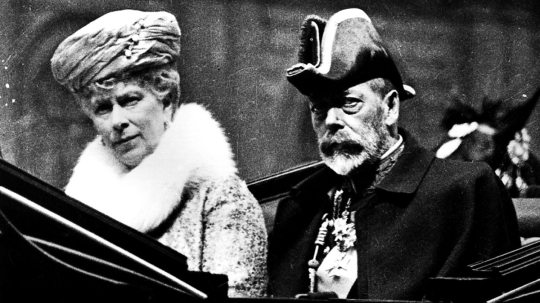 Despite her limitations as a mother, May was a very able senior member of the royal family. In 1901 she was given the title Princess of Wales on her father-n-laws accession to the throne. With her husband George, May visited much of the Empire, completing tours of India, Australia and New Zealand. In 1910 she ascended the throne as Queen Mary, consort to George V. Their reign was challenging with Britain at War only 4 years after Edward VIII death, yet George and May’s stoicism was commended. They visited the wounded and Anglicized the family, disassociated themselves from the German relatives. After the War, May’s role as a supportive wife continued helping her husband with speeches and remained a constant support for George during the difficult times of Irish Independence and Indian Nationalism. In 1935 George celebrated his silver jubilee and in his speech he commended his wife’s support to him over the years.

In January 1936 George V died. David automatically ascended the throne as Edward VIII however he opposed the constitution and plunged Britain into a crisis by abdicating. May couldn’t understand her sons decision to put his personal feelings over his duty – something she always prioritized. Her loyalty was to her second son Bertie, who took on the daunting task of being king. As Queen Mother, May continued to work as a royal, offering support to her son and granddaughters. Her son Bertie – George VI died suddenly in 1952 at only 56. May was devastated and her remaining months were spent preparing her granddaughter Elizabeth for her new role as Queen.

May died in March 1953, only 10 weeks before Elizabeth’s coronation. She was buried alongside her husband in the Chapel at Windsor Castle.