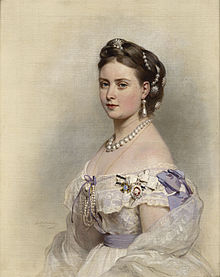 The first born child to Queen Victoria and her husband Prince Albert, Vicky’s birth was an initial disappoint owing to her gender. Nevertheless, her upbringing did not reflect this as she was very well educated for a woman of her class. This was due to her mother’s feeling of lacking in her own knowledge and preparation for royal life, but also her father’s views on the importance of a good education. Princess Vicky was highly intelligent and inherited her father’s thirst for knowledge which held her in good stead for her future.

At the age of 11 she met her future husband, Fritz who was the heir to the Prussian throne. Keen for Britain to form strong ties with his German roots, Albert co-ordinated the match. Luckily for Vicky her marriage was happy. Their mutual care and respect for each was clear and they married in January 1858 when she was only 17 years old. (To read more about their wedding check out my post here)

Straight after the wedding, Vicky was to leave her family and move with Fritz to her new home in Berlin.

Her role as Princess of Prussia was difficult. Even though Vicky and Fritz shared similar political ideas of liberalism, few others in Berlin felt the same, and with many being very anti British. Her political isolation was hard and Vicky relied heavily on her correspondences with her parents. Within months of the marriage, Vicky was pregnant however the delivery of Prussia’s heir almost killed her. With the baby in breach position, and doctors refusing to perform a caesarean section owing to its high mortality rate for the mother, Vicky endured an agonising 48 hour labour. By the time Wilhelm was born, his left arm had been badly damaged in the process. The future German Emperor grew up to resent his mother, her liberal policies and became envious of Britain’s Empire.

Vicky and Fritz went on to have more children, her 8th child and 4th daughter Margaret was born in 1872. As a mother, Vicky was determined her children would receive a good education as she had done, and showed her maternal side through their academic successes. She found it difficult to express her love, particularly to Wilhelm who she communicated via letters. Her guilt over his arm plagued her for the rest of her life.

1888 has been referred to as the year of ‘the Three Emperors’ in German history. Kaiser Wilhelm I died in the march which made way for Fritz to be Emperor. However he was already seriously ill with throat cancer. He was to only rule for 3 months before dying at the age of 56. Poor Vicky was forced to leave her home in Potsdam for the new Emperor’s family. She spent her remaining years away from the royal life that had isolated her. In 1899 she was diagnosed with breast cancer, and died 7 months after mother in August 1901. She was buried alongside her husband in the royal mausoleum in Potsdam with two of their sons that died in infancy.