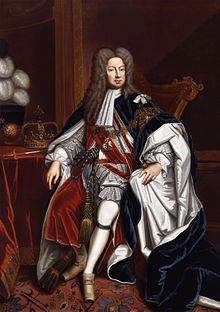 Son of Ernest Augustus, Duke of Brunswick- Luneburg and Sophia of Palatinate

George’s connection to the English throne was through his mother, Sophia as she was once of James I’s grandchildren. After Queen Anne died in 1714 with no living children of her own, the government looked for the closest protestant heir which had been Sophia until her death two months before Anne. This therefore left the throne for George.

George arrived in England in September 1714 at the age of 54 to take the throne. The British public were unimpressed with their new King who lacked the charisma expected of monarchs. George also struggled with English and had to communicate in French. He arrived without his wife but with two mistresses, one rather fat and the other one tall and thin who were dubbed, ‘Elephant & Castle’ after the area of London. Rumors circulated about the ill-treatment of his wife Sophia whom George had imprisoned in Ahlden Castle after she was caught having an affair. She remained trapped there until her death in 1726.

As first elect of Hanover, George had absolute power however in Britain, he had Parliament to answer back which he didn’t like. He resented ministers telling him what he could and could not do so avoided meetings which in part resulted in Sir Robert Walpole becoming the first British Prime Minister. His son, also called George regularly quarrelled with the King over his role and position in court.   George’s popularity went down even further after the South Sea Bubble scandal of 1720 which resulted in huge losses of money for many people after the stock market crashed. Unfortunately for George he was implicated along with his mistresses.

George’s dislike of the English Court led to him spending much more time in Germany than Britain. It is not surprising therefore that it was Germany where he died of a stroke in 1727. His presence in England was not missed and he was buried in Hanover.